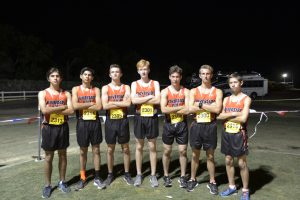 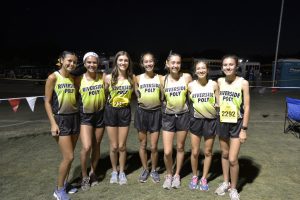 While the latest rendition of the Woodbridge course was not quite as “fast” as the Cool Breeze course, our Poly athletes certainly ran like it was! Overall, 15 of our runners came away with new personal records (PRs) and several others came close. Sporting our new varsity uniforms, the Varsity Girls ran a very respectable 16th place in the “Rated” race and the Varsity Boys team brought home patches for their 6th place in the large schools “Gold-B” division. It is worth noting that the Varsity races were in the cool evening and most of the other races were in the late afternoon when the temperatures were still in the 80s and just above 90! 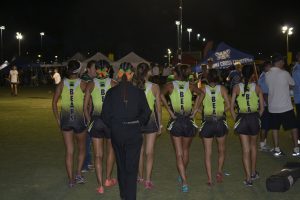 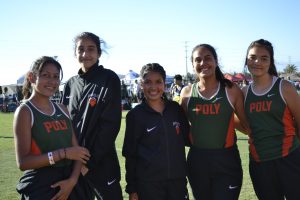 The Varsity Girls team knew that the competition would be fierce. Four out of our seven runners ran  PRs and two others missed by a couple seconds! This crew was led by Carly Marshall (18:05-PR), Elena Umana (18:12-PR), Kalista Tibbels (18:21-2 seconds off PR), Teresa Rangel (19:46-PR), and Helena Valdez/Soleil Russo (both 20:01). We also had 4 other ladies run PRs earlier in the day when the temperatures were still over 90 degrees. Great Job Ladies!!! 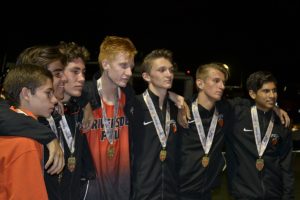 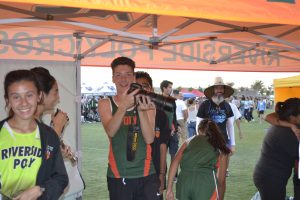 (Note: the Mr. Schiller sighting in the back!)

The Varsity Boys have been running some great times recently. Running consistent times and improving as the season progresses is imperative for them to claim a league title. These boys are doing just that! With very few exceptions, our boys came close or beat their previous PRs…even those who ran in the heat! Some notable performances included: Sam Medure (15:44-PR), Justin Bartlebaugh (15:50-5 seconds off PR), Isaac Umana (15:57), Ethan McDonald (16:14-PR), Andrew Carlson (16:40) and Nathanial Scott-Negrette (16:42-PR). These guys–and many others–ran great races! 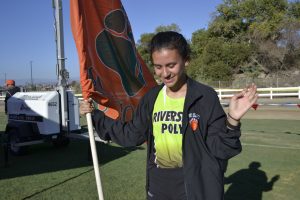