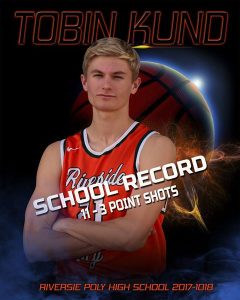 This past Saturday night, the Riverside Poly Bears Boys’ Basketball Team completed their quest to win the Riverside Kiwanis Tournament on their home floor against favored cross town foe Riverside Notre Dame, 70-50. Lamont Butler led all scorers with 33 points and 11 rebounds in the championship game to earn All Tournament MVP. Lamont was joined on the team by Senior Guard Tobin Kund, who broke the school record for three pointers made (11) in a pool play game against Corona/Santiago. Lavele Johnson rounded out the All Tournament honors for the Bears. The Bears picked up wins against Bloomington HS, Corona/Santiago HS, Great Oak HS, Pacific HS, and finally, Riverside Notre Dame HS.

The Bears followed up the Tournament championship by hosting Trinity Prep from Perth Australia on Tuesday night. The Bears continued their winning ways but more importantly shared a great experience with their counterparts from Down Under. The Bears ended the night with a win but shared a great team meal with the Australians but more importantly, had a great time while doing it. We really appreciate Trinity and wish them safe travels on their basketball swing through the US.

The Boys will next play Chaparral High School on December 18th. Be sure to wish them luck! GO Bears!