Riverside Poly High School has been always known for its strength in the sport of soccer. This year is no different as both the Girls and Boys Teams added to their rich histories with Inland Valley League Titles this season. Both teams needed to finish out the season strong to overcome early missteps in league play. 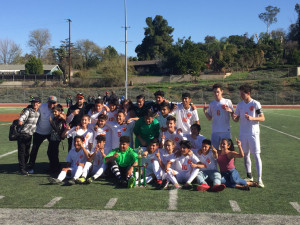 The Boys had a couple of hard fought ties early in league play against Arlington (3-3 on 1/11/17 @ Riverside Poly HS) and Rancho Verde (2-2 on 1/18/17 @ Rancho Verde HS) that put them in tough spot to capture the league crown. After the first round of league play, Arlington had the advantage with a 4-0-1 record while the Bears had a record of 3-0-2. The Bears eliminated the advantage by beating the Lions 4-3 on a unique Saturday game at Arlington High School. The Bears would then go on to reel off four straight wins against the rest of the league to solidify the first league title since 2013. To read more about the Bears and their amazing streak, please follow the link below to read the most recent Press Enterprise Article celebrating this accomplishment as well as talking about their prospects in CIFSS play. The playoffs begin this week on Friday with an opponent to be named on Monday morning.
Area Roundup

The Girls had to overcome the weather and an early tie with Rancho Verde to earn their fifth league title in six years. The girls had several of their games rescheduled due to the rain that we encountered this January. The Lady Bears had to play five games over the final 7 days to finalize the league title. The Inland Valley League Title was essentially decided on 2/3/17 at Rancho Verde Stadium with a score of 2-0. Both goals were scored by Sophomore Jess Hernandez which is par for the course as she has had an amazing scoring streak. To read more about the game please follow the link below for the Press Enterprise recap of the game. The Girls are riding a nice wave going into the CIFSS Playoffs which will begin this week on Thursday night with a team to be announced on Monday morning. Like the boys, the girls will be playing their first round game at home. Please check this website to see the posted game times.
Good luck to both teams, we will be right behind you! Go Bears!
Poly v. Rancho recap