Congratulations go out to Ivan Cano (Boys Soccer) and Sereneia Nagum (Wrestling) as our players of the week! 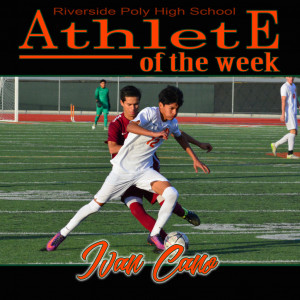 Ivan has been our most consistent player on our First Place Inland Valley Soccer Team. Ivan was recognized last season as First Team Inland Valley League and has come back even stronger this season. The Boys had a huge win on Saturday over Arlington High School (4-3) to take control of the Inland Valley League Standings. It was a hard fought win that was not decided until the final whistle blew. The Boys followed up the Saturday win with another road victory at Valley View High School (2-0) on Wednesday night in not so ideal conditions. The Bears have four games remaining in the regular season and need to win all four to guarantee their Inland Valley League Championship. Their next contest is on Friday versus Rancho Verde High School, 3:15 pm at Riverside Poly High School. Soccer is a team game and this honor could have gone to several players for their contributions during this exciting season but Ivan has been our most consistent performer. Congratulations Ivan! 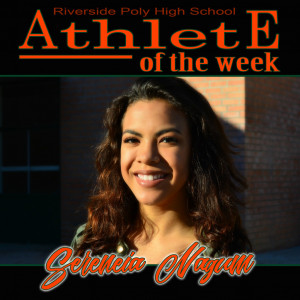 Our next player of the week is Sereneia Nagum for Wrestling. Sereneia has brought back Girls Wrestling to Riverside Poly High School. To date, she has had a very successful season starting with a combined 8-2 record. She placed second at the Murrieta Valley Tournament and seventh at the Ayala Tournament. She has been a great competitor for Riverside Poly High School. Sereneia will be representing Poly at the Female Individual Wrestling Championships at Hillcrest HS on Saturday 2/4. Please wish her luck this weekend. We look forward to hearing about her success going forward. Go Bears!