Congratulations to our Athletes of the Week for January 18th, Brian Geiger (Wrestling) and Grace Haliday (Girls Water Polo). 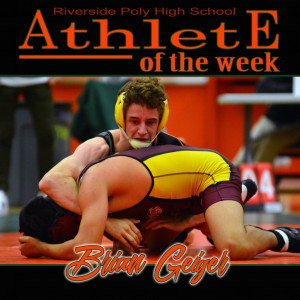 Brian Geiger
Brian has been one of our strongest wrestlers all season. He dominated Arlington opponent on January 12th to help secure points for the Bears. Brian has a season record of 18 wins and 11 losses. He finished 2nd at the prestigious John Beresford Classic at Rim of the World High School back in December. Overall, Brian looks to secure a spot in the CIFSS Individuals on the 28th of January at the Inland League Finals. Please wish him luck. 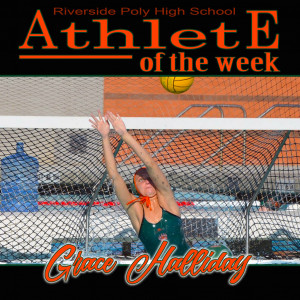 Grace Haliday
Grace has been a wall for the Girls Water Polo team as they make a run for the programs fifth CIFSS crown this season. The Lady Bears have played a tough non-league schedule which includes the prestigious tournaments of Coronado, Newport Harbor, and the Tournament of Champions in Santa Barbara. Currently, the Girls Water Polo team ranks fourth in Division 2. Grace is allowing only 7 goals per game at this point in the season. The Lady Bears are currently first in the Inland Valley League. Please go out and watch a game when you get the chance, you will not be disappointed!